Posted on January 31, 2014 | Comments Off on Henry Hikes to Fitchburg 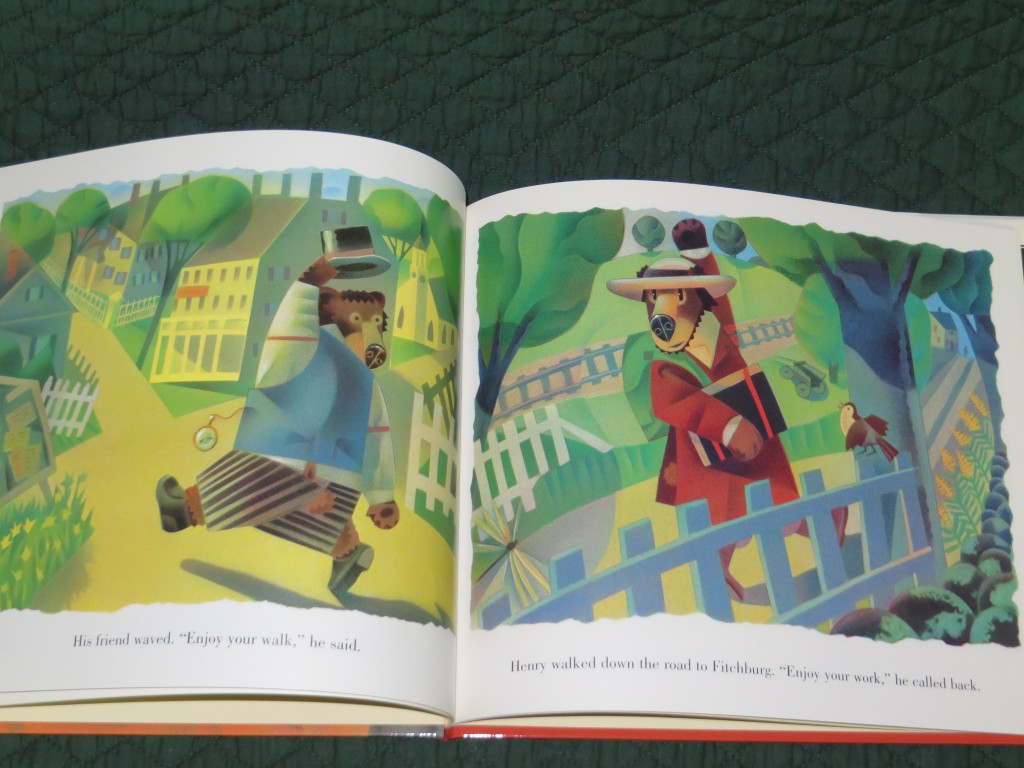 One summer day, Henry and
his friend decided to go to
Fitchburg to see the country.
“I’ll walk,” said Henry.
“It’s the fastest way to travel.”
“I’ll work,” Henry’s friend
said, “until I have the money
to buy a ticket to ride the
train to Flitchburg. We’ll see
who gets there first!”

Being thoughtful about the kind of effort is best suited to a particular task, rather than just hopping into the first thing that comes to mind is a good message for anyone.  The boys like the racing aspect of the book, they like counting the money and the miles accumulated by the two bears, and they are always a bit surprised that the “winner” is ambiguous.

While we really enjoy this book, we’ve tried out a few other in this series (Henry Builds a Cabin and Henry’s Night) that did not connect with the boys.  Your mileage may vary.

Comments Off on Henry Hikes to Fitchburg

I Will Never Not Ever Eat a Tomato 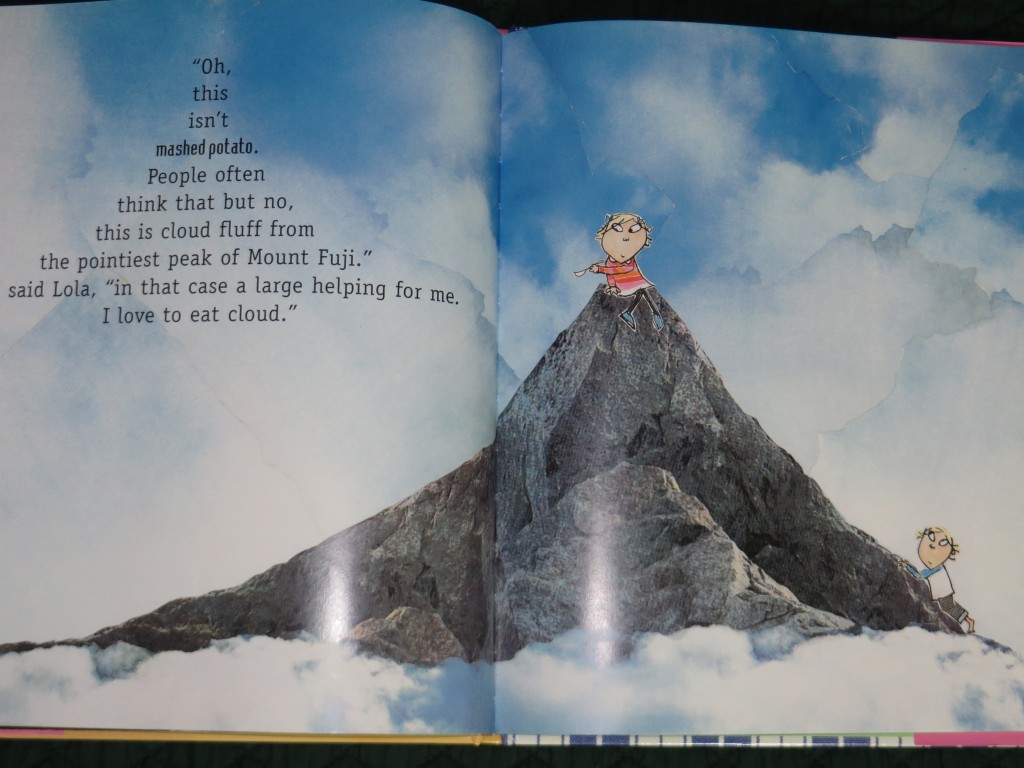 Lola was sitting at the table,
waiting for her dinner.
And she said,
“I do not eat
peas or carrots or potatoes
or mushrooms or spaghetti
or eggs
or sausages.
I do not eat
cauliflower or cabbage or baked beans
or bananas or oranges.
And I am not found of
apples or rice or cheese
or fish sticks.
And
I absolutely
will never
not ever
eat a tomato.”
(My sister hates tomatoes.)

If this list sounds familiar, this may be just the book for you.  With some creativity and a sense of adventure two siblings turn a meal full of forbidden foods into a delicious feast.  There are no carrots, peas, fish sticks, mashed potatoes, or tomatoes on the menu (perish the thought!).  Instead, orange twiglets, green drops, ocean nibbles, cloud fluff, and moonsquirters rule the day.  Perfect for parents who may be looking for a different way to present dinner and kids who are looking for a good laugh.

Comments Off on I Will Never Not Ever Eat a Tomato

Tagged food, I Will Never Not Ever Eat a Tomato, Lauren Child, rebuses, series

The Lady with the Alligator Purse

Posted on January 27, 2014 | Comments Off on The Lady with the Alligator Purse 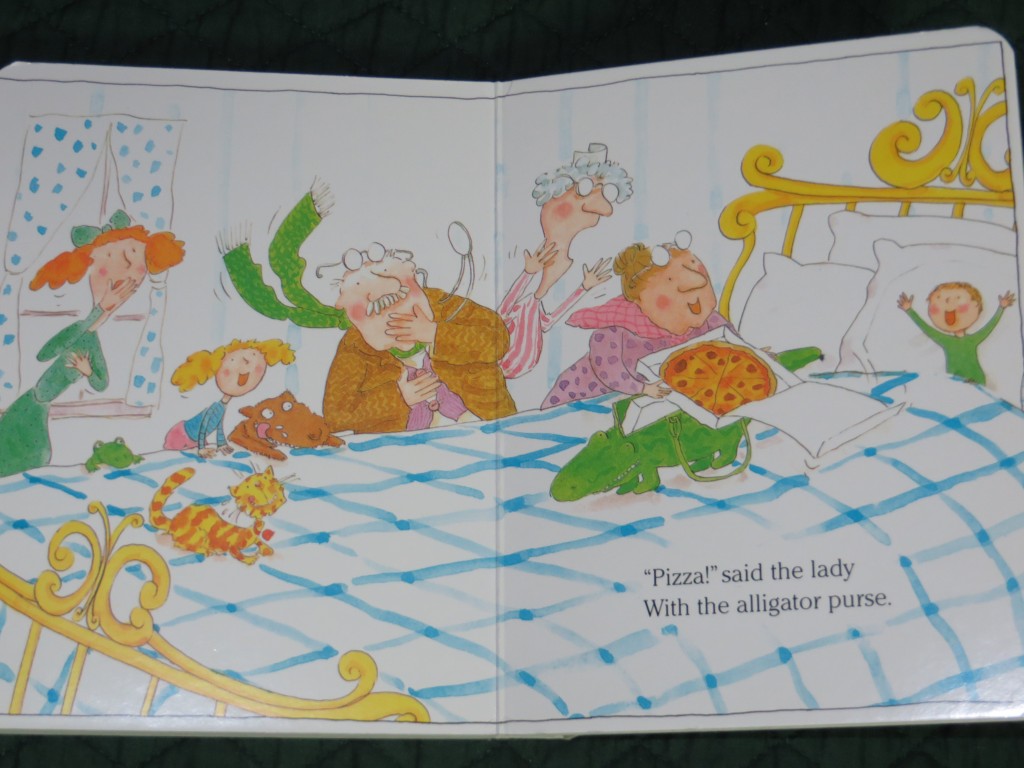 Miss Lucy had a baby,
His name was Tiny Tim,
She put him in the bathtub
To see if he could swim.

Does anyone else remember jump roping to this song?   If so, this book starts out as you remember it, but things soon start to change.  Before you know it, the lady with the alligator purse is prescribing pizza to cure what ails the baby and the doctor, the nurse, Miss Lucy, et al. are happily feasting away.  My youngest has a tradition of reading this “pizza book” with his Dad at bedtime when we’ve had pizza for diner.  It’s a keeper and it comes in both board and picture book form.

Comments Off on The Lady with the Alligator Purse

Posted in Board Books, Picture Books 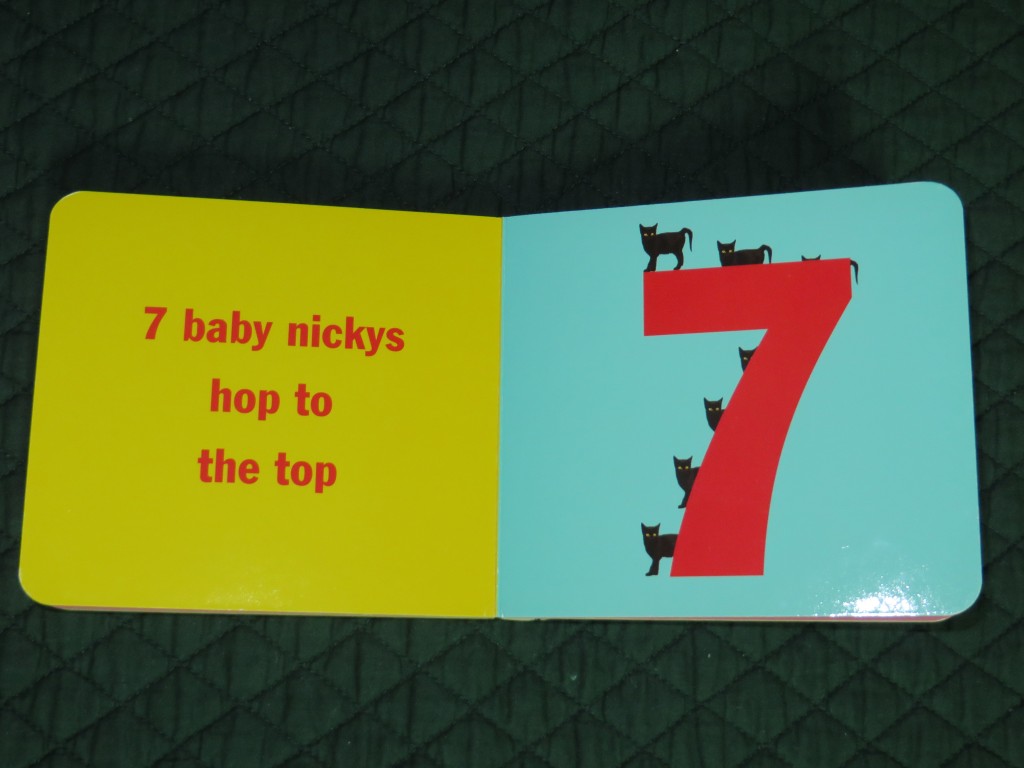 When my oldest was a young toddler, Baby Cat Nicky 123 was his favorite book.  He loved having it read to him.  (Was it the cats?  The rhythm?  The bright colors?)  And he loved chewing on it so much that we had to buy another copy.  This came as a complete surprise; I had bought the book on a whim to compliment the (excellent) Nicky’s Jazz for Kids CD (which is still in regular rotation in my car).  Although this book is no longer in demand, well over four years later, I still have its text completely memorized.

Comments Off on Baby Cat Nicky 123

This is another book with a great premise.  Libraries and lions really do (or should) go together.  The idea of a lion who basically adopts a library would be enough to carry a book.  But this book goes further.  It is also a story about friendship and about rules.  Rules, this story says, are very important.  But sometimes, when there is a very good reason (like friendship), some rules can be broken.

This books trusts kids to be able to understand nuance.  As someone who spends a lot of time focused on rules (“Elbows off the table!”), I appreciate that.  And, leaving aside all nuance, the kids greatly appreciate the frequent opportunities to roar along.

Comments Off on Library Lion

Diary of a Wombat

This funny story is entirely narrated by a deadpan wombat (an Australian marsupial that look like a brown bear cub that somehow got mixed up with a koala and groundhog).  Initially, her days are unvaried; she spends her time sleeping, eating grass, and scratching. But when some new neighbors move in, her life (and theirs!) starts to change. After some consideration (and a lot of carrots) she decides “that humans are easily trained and make quite good pets.”  (One suspects the humans have reached a rather different conclusion about wombats.)

This story, with its brevity and constant sleeping, is perfect for bedtime.

Comments Off on Diary of a Wombat

Posted on January 20, 2014 | Comments Off on The Three Billy Goats Fluff 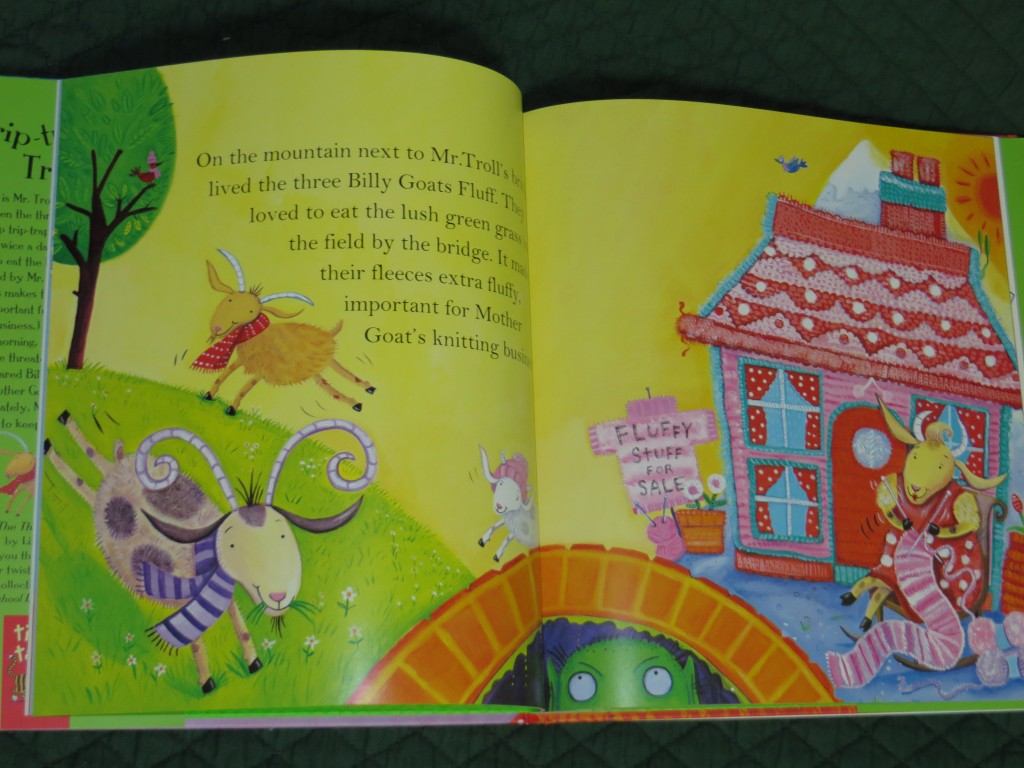 Trolls usually don’t have a great reputation (the cute troll family in Frozen is definitely an outlier).  But how would you like it if every time you tried to sleep someone went trip-trapping all over your ceiling?  Poor Mr. Troll hasn’t slept well since he moved under the bridge leading to a lush green field.  How can he get the rest he needs while letting his neighbors (the goats of the title) get the grass they need?  Luckily, Mother Goat is a knitter and she works up an unorthodox solution.  This story is fun to read and never quite overly cute and fluffy.  My youngest particularly enjoys it.

Comments Off on The Three Billy Goats Fluff

Posted on January 19, 2014 | Comments Off on Alice’s Adventures in Wonderland 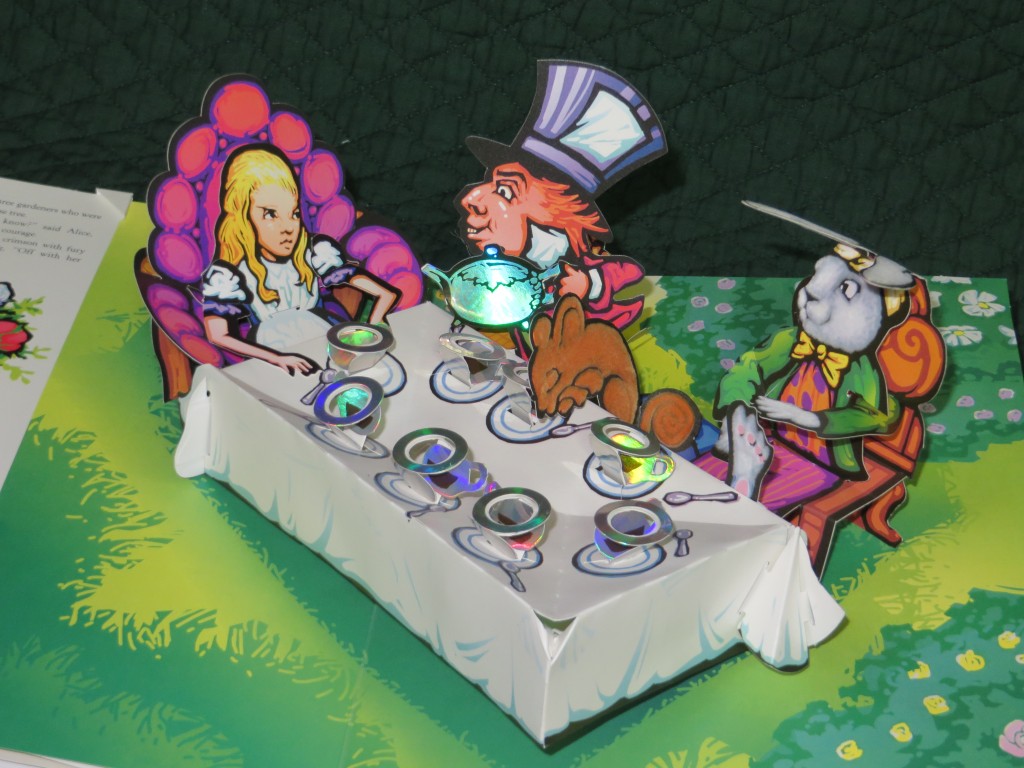 I tried reading the original version of Alice in Wonderland to my oldest about a year ago as our before-bed-chapter-book.  It did not click; we abandoned it.  This version, on the other hand, has been entirely successful.  It contains the essence of the story, the visuals are wonderful, and it never feels too long.  Both boys are thrilled when I pull it out.

Comments Off on Alice’s Adventures in Wonderland

Posted in Pop Up Books 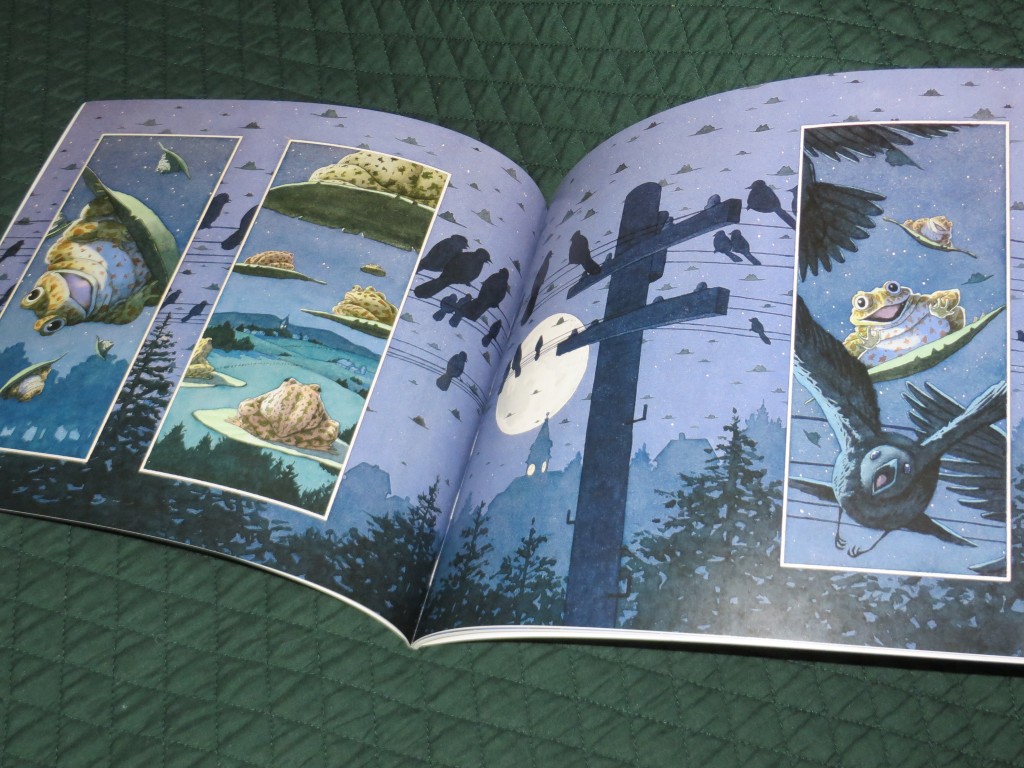 Like George Shrinks and When Dinosaurs Came with Everything, this book has one great concept (spontaneously-flying frogs!) and joyfully explores it.  There are only two full sentences, but this is a real charmer.

Comments Off on Tuesday 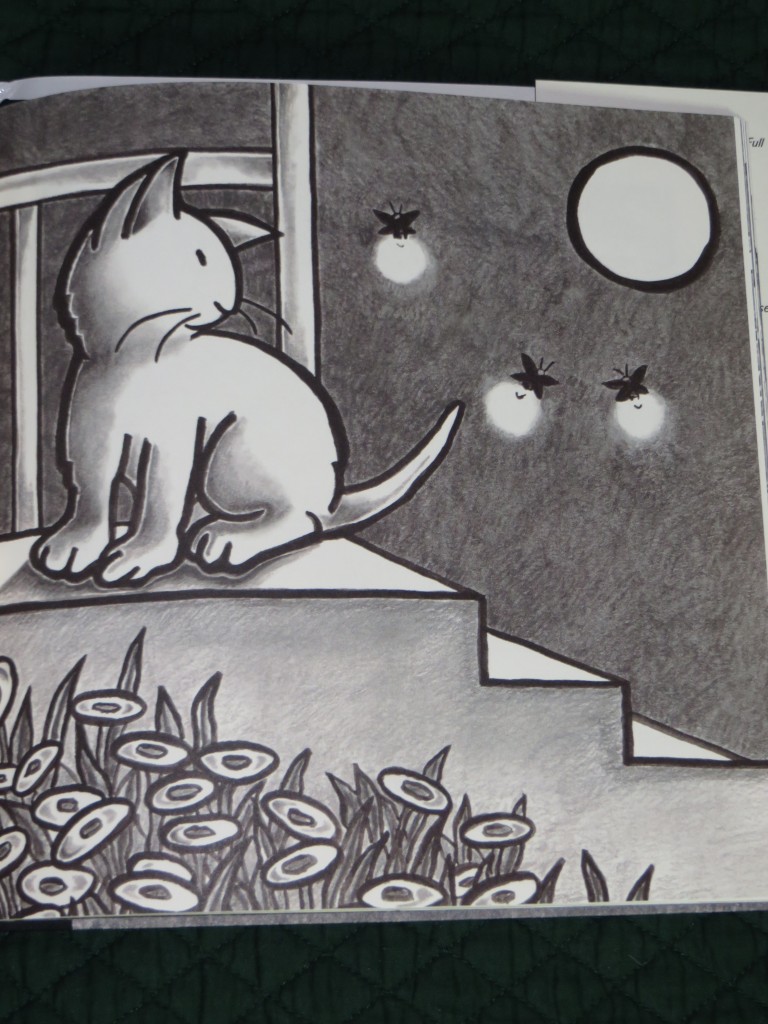 It was Kitten’s first full moon.
When she saw it, she thought,
There’s a little bowl of milk in the sky.
And she wanted it.

Kitten tries (and tries) to reach the little bowl of milk that she wants so much.  Things do not go well.  (Poor Kitten!)  But, as you might expect, there is a happy ending waiting.

This soft, sweet, short story is perfect for just before bed.